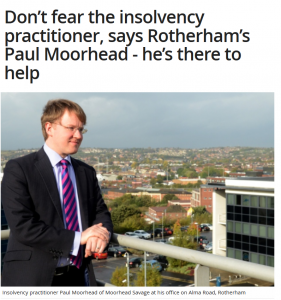 Paul Moorhead knows only too well how desperate and disillusioned the owners of failing businesses feel. He was once in their shoes. He had a company which treated fabrics for the lighting industry, but when it hit problems he was never given advice on how to turn things around. He lost the business and was heavily in debt, but decided to use his bad personal experience by becoming an insolvency practitioner. He trained with the P&A Partnership in Sheffield and was England and Wales inspector for the Institute of Chartered Accountants before setting up Rotherham insolvency practise Moorhead Savage in 2009.

Q. Many think insolvency practitioners lead a life of gloom and doom and only close businesses down. Is that fair?

A.I have been accused of being the ‘Grim Reaper’ on the odd occasion and there is a saying that insolvency practitioners ‘turn up after the battle and bayonet the wounded.’ The reality is that life as an insolvency practitioner is challenging, frustrating, painstaking and exciting in equal measure. The challenge is to apply the principles of insolvency law to businesses in different fields: from hospitality to agriculture and everything in between. No two assignments are the same.

Q.How much of your work is spent trying to SAVE businesses?

A.We are here to help pick up the pieces when things go wrong and, wherever possible, try to save businesses and jobs.Half of my time is spent rescuing companies. I start with a blank piece of paper every time – there are no preconceptions or assumptions about where the assignment will lead. If a business is fundamentally viable, we give it a fighting chance of survival, even if it is struggling under unaffordable levels of debt. But if people are afraid of asking for help and they leave it too late, there is often little opportunity to salvage anything. And if a business has to close, someone has to take responsibility for overseeing the closure, and doing it fairly and transparently.

Q.How many businesses have you helped to turn around in the five years Moorhead Savage has been running?

A.I can count at least 27 businesses that were able to carry on as a result of our intervention. They employ several hundred people between them. It is a great feeling when I see that a business I have been involved with is now thriving.

Q.Is it a rewarding occupation to be in, or a frustrating one?

A. Both, and in fairly equal measures. It is deeply rewarding to help a business to overcome difficulties and survive, especially when you take into account the amount of time, money and effort that business owners put into setting up and growing their companies. But it is also very frustrating when a business owner asks me to help when he has struggled for a long time and the opportunities to turn it around have already evaporated.

Q.Do you help employees who are at risk of not getting paid if their boss has to wind up the company?

A.There are several ways we try to help employees. If a business is closing down and the staff are laid off, we can signpost them to potential employers. If I am acting as liquidator or administrator of a company, I help the employees to make their claim for redundancy, unpaid wages and so on from the Government. But finding a new job can be tough and can cause financial problems. We also offer personal debt solutions, advice and repayment plans.

Q.You decided to work in insolvency because you experienced the failure of your own manufacturing business. How did you feel when you had to give it up?

A.I don’t think it really sank in for a while. I had put five years of my life and thousands of pounds of investment in, only to see it all disappear. It was a bitter blow. I was faced with being unemployed and in debt. But I realised I had an opportunity to start again and put my experience of running a business and dealing with things when they don’t go according to plan to good use.

Q. Could an insolvency practitioner have saved you?

A.I often think back to the advice I was given at the time and I don’t remember discussing the possibility of saving my business. Now I make sure every avenue has been explored before recommending a particular course of action. I can use my ‘insolvency toolkit’ to save businesses when the conditions are favourable and my role is to help the business owner to make an informed decision about the best way forward in the unique situation and circumstances they face.

Q. You are one of the region’s experts on insolvency and business turnaround and won a national award last year. From failed businessman to business saviour – that’s some personal turnaround.

A.I went to work for my father’s Manchester textile business instead of going to university and learnt about the real world of work and of enterprise. I have always wanted to know why we do something a certain way, rather than just how to do it.

But after my business failed I decided to study for a degree. I was in my late 20s and worried I might have lost the ability to study but I enjoyed it so much so that I went on to complete my PhD in insolvency law. My first idea was to become a lawyer and to specialise in insolvency, but I was talked out of it by a solicitor friend. So I wrote out a plan to become an insolvency practitioner. I’ve still got the piece of paper.

My university studies took nine years. I also studied for two years for the technical qualification needed to be an insolvency practitioner, which I did as ‘day release’. Juggling work and study became second nature.

And my friend was right. Being an insolvency practitioner is a bit like conducting an orchestra: lawyers play an important role, but the IP is in overall control and has the opportunity to make a difference. Clients sometimes say to me: “You don’t know how it feels to be at risk of losing your business,” and sometimes I share my story with them. Hopefully it reminds them that an insolvency isn’t the end of the world. As Winston Churchill said: “A pessimist sees the difficulty in every opportunity; an optimist sees the opportunity in every difficulty.”